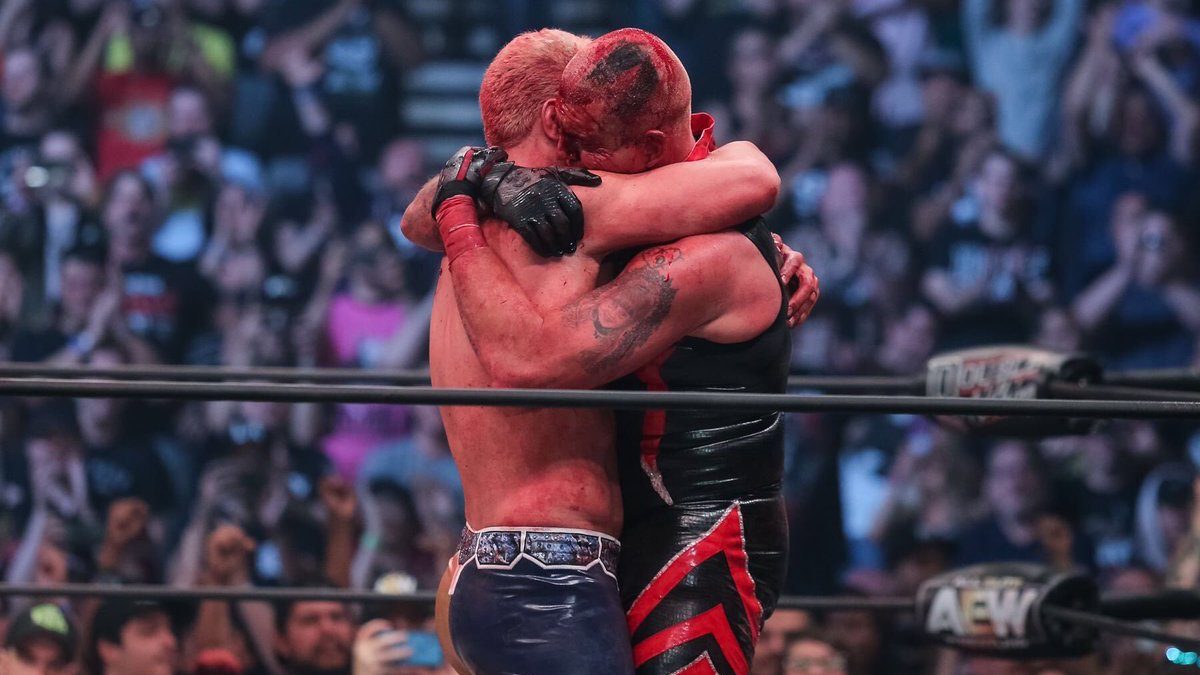 A recent episode of the Talk Is Jericho podcast had Dustin Rhodes as the guest and one of the topics discussed included him getting busted open during his match against Cody at AEW’s Double or Nothing event.

” I know a lot of people were worried. I was worried. You do it and you see it start streaming out and I was like, ‘Oh no. I went a little bit too deep.’ 10 minutes go by and I’m starting to worry because the whole ring is red, it’s all in my eyes, I’m trying to wipe it out but it keeps shooting out to my heartbeat. It gets scary. After 15 minutes, I knew I’d be okay. You saw the fans faces. They were horrified, but into it. It was incredible.

I’ve always been told, ‘red on the head is green in the pocket.’ I believe that to be true to an extent, when it’s used sparingly. It was just right [At Double or Nothing]. I’m still on a huge high from this match. We stole the show from the legendary Chris Jericho.”

NJPW General Manager on Rumors of a Potential Partnership with AEW

Sports Illustrated held a recent interview with New Japan Pro Wrestling’s General Manager Michael Craven and one of the topics discussed included Jon Moxley’s debut for the company and if that means they are in partnership with All Elite Wrestling.

“NJPW has a long and rich history with our international partners, including CMLL in Mexico, Ring of Honor in America, and RevPro in the United Kingdom. Loyalty is a big virtue, especially in Japanese culture. Loyalty to our partners is of utmost importance to us as we continue to foster the premiere network of wrestling talent in the world. We wish everybody at All Elite Wrestling nothing but the best in their ongoing endeavors, though we must stress we have no working arrangement at this time. Again, we think our partners seek and deserve loyalty and an appropriate amount of care. We want our relationships to be mutually beneficial over the long haul, rather than just thinking in the moment.”

WrestlePro announced that Bret Hart will be making an appearance for the company at their December 7th event in Anchorage, Alaska.

Starrcast announced that Sting will be making an appearance at their Starrcast III convention, which takes place from August 29th to September 1st in Chicago, Illinois.

ROH announced three new matches for the card of their Best In The World 2019 event on June 28th in Baltimore, Maryland:
– Dalton Castle vs. Dragon Lee
– Flip Gordon vs. Rush
– Colt Cabana & Nick Aldis vs. The Briscoes (Jay & Mark Briscoe)