Samoa Joe Back in NXT as GM William Regal’s Enforcer 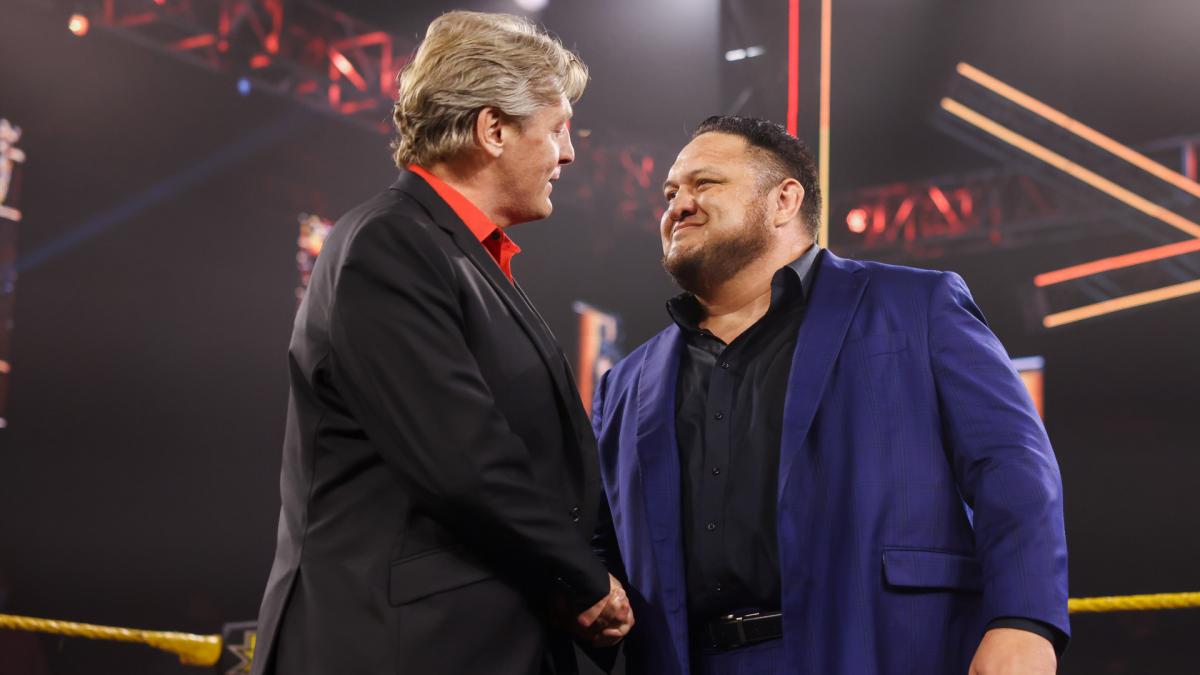 Samoa Joe made his return to WWE on tonight’s NXT episode and will be a regular character as a sort of “enforcer” for General Manager William Regal.

In the show’s opening segment, a teary-eyed Regal came into the ring and started to emotionally talk about his time in NXT and how he’s been there from the beginning and watched it become what it is today, then said that “because of all the chaos, I’ve given you all that I can give.” He appeared ready to announce that he was stepping down as GM, when Karrion Kross’s music hit. Kross got in his face and called him pathetic for crying and said that he can control NXT through chaos and violence. He demanded that Regal say that he’s leaving and never coming back and that Kross was right.

Suddenly, Samoa Joe’s music hit and he came out in a suit to a big pop. He got in the ring and said that Regal wanted to speak to him. Regal said, “”Because of my love for NXT, I think everyone deserves a general manager that can hold the position with the integrity and respect that it deserves, so I would like you to be the new GM of NXT.” Joe said, “My answer… is absolutely not.” Joe praised Regal’s seven years in NXT and said that he has large shoes to fill, so he cannot accept… “but I’ll make you this offer… I always understood that I made your life hell when I was here, but I always afforded you respect. I would be more than happy to assure that you receive the respect that you deserve from everybody.”

Regal said that he was willing to do that with some conditions. #1: Joe cannot be a competitor. #2: He cannot lay a hand on anyone… unless provoked. Joe shook Regal’s hand and said that he accepted his offer. He then got in Karrion Kross’s face and asked, “What are you still doing in this ring? Tick tock, young champion.” Kross exited the ring as the crowd chanted “Joe is gonna kill you.”

Later backstage, Adam Cole was brawling with Kyle O’Reilly and Regal and other officials struggled to break it up, when Samoa Joe came in and pulled off O’Reilly. Cole shoved Joe, then Joe took off his suit jacket and locked on the Coquina Clutch on Cole.

Later in the show, Pete Dunne came up to Joe backstage and stared him down without saying anything.

And at the end of the night, Regal stood with Joe and was asked for his thoughts on night one with Samoa Joe. He said, “I think things are going to be a little different around here” and Joe said, “Night one of many” and shook Regal’s hand, then they both got into an SUV together.

The expectation is that Joe is not cleared to wrestle due to a series of concussions, but it’s always possible that that could change.

Joe was released by WWE in April of this year. According to PWInsider, Triple H was not happy about the release and wanted him in NXT rather than have him sign elsewhere, so he “snatched him back” as soon as possible.