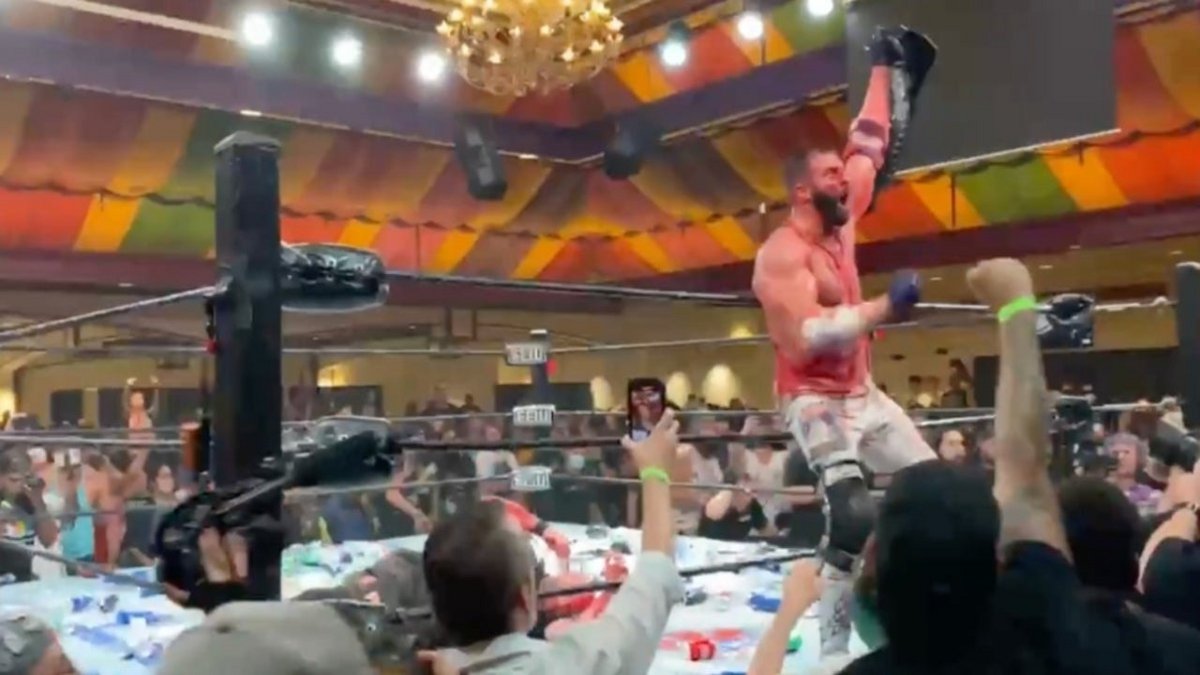 As noted before, Matt Cardona defeated Nick Gage to win the GCW World Championship at Game Changer Wrestling’s Homecoming 2021 Night 1 event this past Saturday. Following his win, the crowd at the event became very rowdy and tossed beverages into the ring at Cardona.

A recent episode of the Busted Open Radio podcast had Cardona as the guest. One of the topics discussed included his thoughts on the crowd’s rowdy reaction to him during his GCW title match.

“I’ll be honest, there was some fear. Walking through that curtain, you can watch the replay, I couldn’t get through the curtain and there were fans in my face. Luckily, GCW had some security for me because I think someone would have taken me out, or tried to. I finally get (to the ring) and you can feel the genuine hate (from the crowd). Not just, ‘this is the bad guy we’re supposed to boo,’ but hate. During the match, the atmosphere was exciting. People just wanted me to die in there. I was getting tweets about people wanting me to die and for Nick to kill Chelsea. Human beings are really typing this, what is wrong with people? Then, when I win, you saw the video. They are just throwing stuff. Bottles, full bottles. Someone threw a fucking pizza cutter. Jesus, come on. I tried to enjoy it, but I was genuinely concerned. This wasn’t like NWO with a couple of bottles and you stand there and smile. I didn’t know what was going to be thrown. I was in there for as long as I could and tried to get the money shot with the title. The GCW security was like, ‘we gotta go, run out the front.’ They brought me out and fans were still chasing us out. It was wild.

It’s 2021, we all know the deal. To get that kind of reaction, there have been similar reactions before, but I personally have never seen anything like that. It was a once-in-a-lifetime experience. Do I wish fans would have shown me more respect? Cool. Do I wish someone didn’t throw a pizza cutter? Cool, but man, I don’t regret any of it because it will live forever.”

Update on AEW’s Plans for FTR vs. Santana & Ortiz and Other Feuds

This Wednesday’s episode of AEW Dynamite is currently scheduled to feature a tag team match between FTR and Santana & Ortiz.

Fightful Select reported that AEW officials had penciled in this match to take place at this week’s show in Charlotte, North Carolina since mid-May and was not something that was quickly put together for the show’s card.

It was also reported that AEW officials already have tentative plans in place for a major singles feud to take place this fall.

Mexican wrestler Super Porky (also known as Brazo de Plata), real name Jose Luis Alvarado Nieves, reportedly passed away on Monday at the age of 58, according to Mas Lucha. The cause of death for Nieves is currently not known. Nieves’ career in wrestling spanned from 1977 to 2021 and included notable stints in Consejo Mundial de Lucha Libre, Lucha Libre AAA, and WWE.

Pro Wrestling Guerilla announced that they will be holding an event called Threemendous VI event on September 26th in Los Angeles, California.

Ring of Honor announced that they are currently holding a fan vote on their ROH The Experience Facebook page asking fans if Quinn McKay should receive the final spot in their upcoming Women’s World Championship tournament.

All Elite Wrestling recently announced that they have partnered with North Carolina-based Safe Alliance charity ahead of this Wednesday’s Fight for the Fallen 2021 themed episode of Dynamite. The company also announced that they will be donating $100,000 to the charity along with a portion of all proceeds from the sales of a limited edition shirt for this upcoming show.

Dave Meltzer reported in a recent episode of the Wrestling Observer Radio that Chase Owens is currently planned to be one of the competitors for this year’s NJPW G1 Climax tournament. Meltzer reported that the reason for Owens winning the Provisional King of Pro Wrestling 2021 Championship at this past Sunday’s Wrestle Grand Slam event in Tokyo was to help build him up as a credible competitor for the tournament.