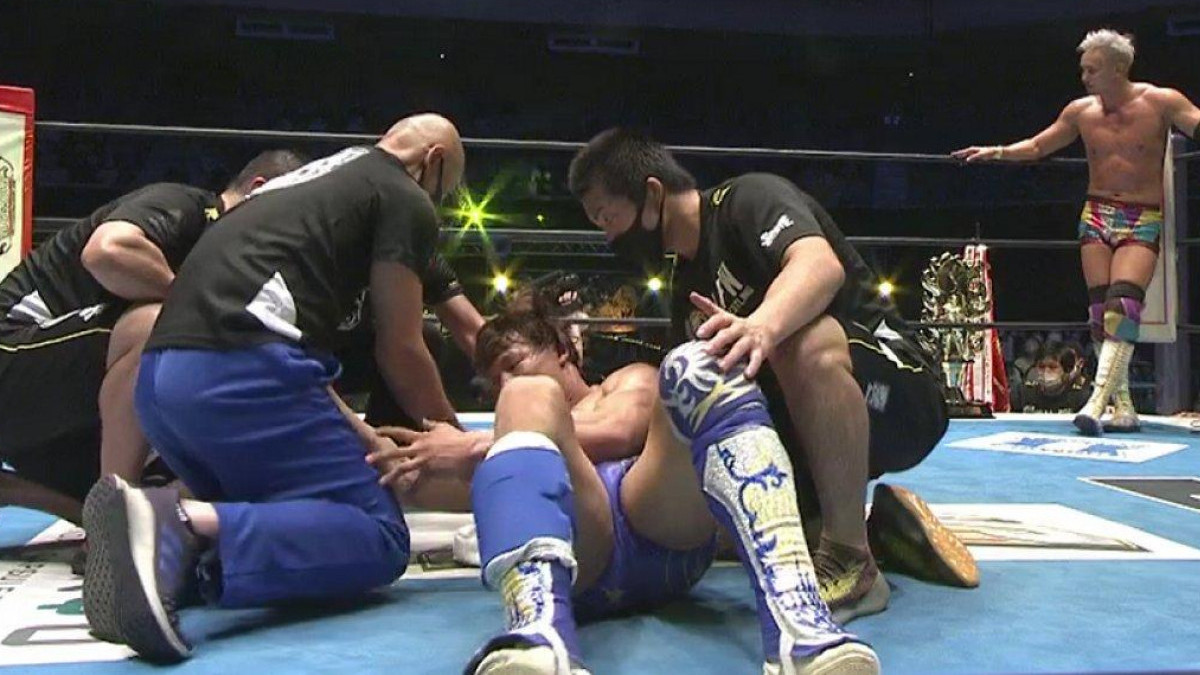 NJPW chairman Naoki Sugabayashi recently confirmed that Ibushi did suffer a dislocated shoulder injury during his match at the event. Sugabayashi also stated that updates to the status of Ibushi’s injury and potential return timetable will be announced in the future following the results of additional medial testing.

“I have two updates for you today. Firstly, in the G1 final last night in the Nippon Budokan, Kota Ibushi incurred a dislocated right shoulder during the match, and was treated by the ring doctor and training personnel. Further updates to Ibushi’s condition and a timetable for return will be announced after Ibushi has received more thorough appraisal.”

Dave Meltzer reported in this week’s Wrestling Observer Newsletter that prior to his injury, NJPW officials had originally planned for Ibushi to lose against Okada in the Finals but also be made to look good in defeat with a strong performance. Ibushi reportedly was also originally planned to challenge Shingo Takagi for the IWGP World Heavyweight Championship at next month’s Power Struggle 2021 event due to his G1 Climax victory over Takagi earlier this month. Meltzer reported NJPW officials changed their plans for Zack Sabre Jr. to be Takagi’s challenger following Ibushi’s injury.

As noted before, WWE released Bronson Reed this past August as part of a larger batch of releases that targeted the company’s NXT brand and developmental system.

Fightful Select reported that both New Japan Pro Wrestling and Impact Wrestling have recently shown a lot of interest in signing Reed, also known as Jonah Rock in the indies, to a potential contract.

In regards to NJPW, it was reported that their sources stated that NJPW officials recently “made a big play” to bring in Reed to their company.

In regards to Impact, it was reported that those spoken to stated that Impact officials did have some discussions about Reed making a potential appearance at tonight’s Bound for Glory 2021 event but those same sources were not confident that it might happen.

As noted before, Jim Ross underwent a CT scan earlier this week to diagnose a potential skin cancer issue that he has been dealing with for the past several years. Ross provided a health update earlier today on Twitter stating that the results came back positive and he is currently battling skin cancer.

As noted before, “Filthy” Tom Lawlor’s current contract with Major League Wrestling is currently set to expire within the next several weeks. Dave Meltzer reported in this week’s Wrestling Observer Newsletter that Lawlor’s current contract expires at the end of this month and those close to him stated that he has not given any indication about his plans for the future of his career.

Following this past Thursday’s G1 Climax 2021 event, NJPW held a press conference to discuss several topics. One of the topics discussed included NJPW currently working on plans to change their COVID-19 protocols to resume running events with more matches for event cards and longer runtime for bigger events. The official reason given was due to COVID-19 cases in Japan have recently gone way down and everyone on their roster has been vaccinated.

Impact Wrestling recently announced that they have pulled Tenille Dashwood from the card of tonight’s Bound For Glory 2021 event. The previously scheduled Six-Person Impact Digital Media Championship was announced to be remaining the same but with Madison Rayne as Dashwood’s replacement. PWInsider’s Mike Johnson reported that the reason for Dashwood’s removal from the show is currently not known.

Defy Wrestling recently announced a new match for the card of their DEFY Marauders event on October 29th in Seattle, Washington: