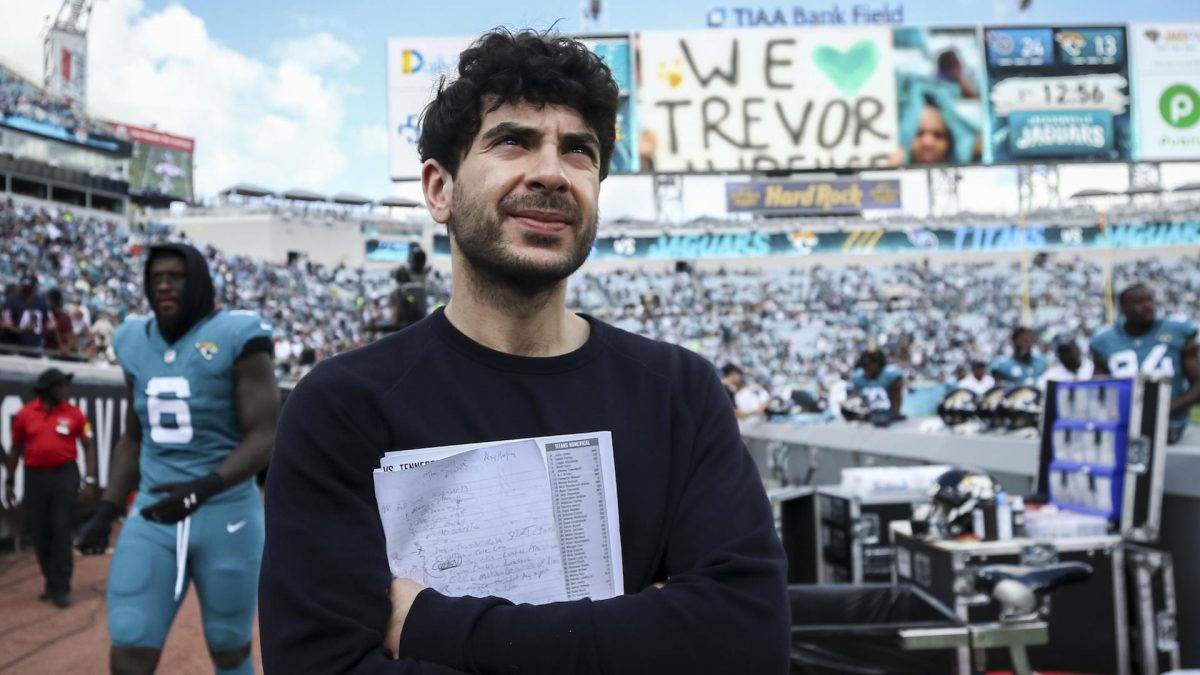 As noted before, the full card for next month’s AEW Full Gear card might have been accidentally revealed from an Associated Press photo taken of AEW CEO Tony Khan during this past Sunday’s Jacksonville Jaguars football game in Jacksonville, Florida.

A recent episode of the Busted Open Radio podcast had Khan as the guest. One of the topics discussed included Khan’s thoughts on the photo of himself holding a sheet of paper that might have spoiled the card of this year’s Full Gear event.

“I was doodling on my notebook and I saw a lot of people took notice of the notes in my notebook, which is pretty amazing because when you’re walking around with full notes, you never think photographers are going to capture the small writing you’ve written down. I’m glad it wasn’t anything more personal. It’s funny that people run with assumptions on the internet these days. I’ve seen all these people jumping to conclusions that, ‘oh, that must be the Full Gear card.’ It is true, I announced that Kenny vs. Hangman is the main event that we’ve all been waiting for with Full Gear, it’s going to be a huge pay-per-view, it is absolutely (booked). I just have notes and have been messing around with different ideas and playing around with stuff. You can even see, it’s scratching around and written in pencil and been erased. I think it’s pretty fortunate because it’s gotten a ton of buzz and has gotten people wondering and people should be wondering. It creates more speculation and now I’ll leave you with more questions than answers.”

Chris Jericho reportedly is currently expected to be away from AEW for at least two weeks starting in late November, according to the Wrestling Observer Newsletter.

Dave Meltzer reported that Jericho’s band Fozzy currently has a tour of the United Kingdom and Ireland scheduled from November 29th to December 12th and likely meaning that Jericho will be away from AEW television during that time period. Meltzer reported that while Jericho is expected to miss live tapings, he could still appear in pre-taped segments depending on AEW’s storyline plans for him at the time.

A recent episode of the Shot of Brandi show had Stephen Amell and Cody Rhodes as the guests. One of the topics discussed included Rhodes thoughts on Arn Anderson’s fall from the apron during AEW’s Dynamite Grand Slam event last month.

“We designed our ring based on the New Japan specs. The aprons are extra wide so the guys and girls can do stuff on the apron. What happens, is the post is farther away. Normally, you can just wrap around the post and get to the other side. [Inaudible] That was the distance from about right here [holds arms out]. Arn’s not familiar with that and the ropes are smaller too, so he went to make that switch and there was nothing to hold onto. It’s the craziest thing a referee has ever told me, when Paul Turner said, ‘He fell down.’ [I said] ‘Who fell down?’ Then I just saw Arn. He’s a legend though and he threatened to shoot me.”