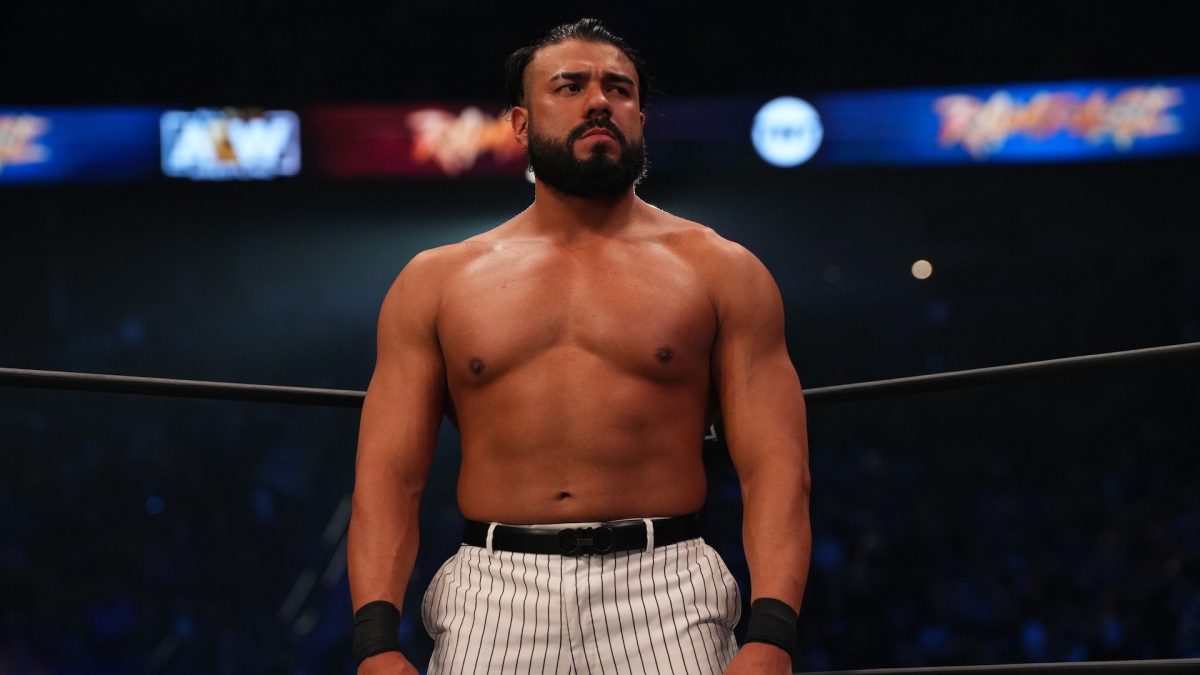 As noted before, Andrade El Idolo announced last week that he will not be appearing at AEW and New Japan Pro Wrestling’s upcoming Forbidden Door event on June 26th due to issues involving Lucha Libre AAA and Consejo Mundial de Lucha Libre.

Lucha Libre Online held a recent interview with Andrade and one of the topics discussed included Andrade revealing AEW’s original plans for him for their co-promoted Forbidden Door event.

“My bother is not with AEW, because they had an idea for me to face Will Ospreay. He’s a magnificent wrestler, but that was the original pitch for the (IWPG) US Championship. The idea was also to go to Japan for a week or two and come back to be on this event (Forbidden Door). A week passed and I was informed that I could not work the show because the Mexican wrestlers that work with AAA could not work with NJPW. It was weird to me because many wrestlers from many nationalities work with NJ and AAA, like Kenny (Omega) and Young Bucks, so it was odd. I don’t understand the reasoning either, but it really bothers me as I was excited, but the Mexican people that work with AAA could not work with New Japan. I think Penta and Fenix could not work the show either, but that’s what I know. It’s frustrating because of how me and Rush helped elevate Los Ingobernables, but I know about the CMLL-NJPW Partnership. I understand that AAA had opened the doors to resolve the issues, but have not been resolved.”

Andrade also gave his thoughts about being pulled from the event due to AAA and CMLL’s current feud with each other.

“I ask myself the same. I don’t have a contract with AAA, but my bother is that I love wrestling in Mexico, but I also love wrestling in Japan. I was scheduled for TripleMania Tijuana, but that did not happened. AAA never canceled my booking for the show so I could go for Japan. Another thing was that, last year, I had talks for a contract with AAA for this year, but I was not contacted about it again. AAA told me that I can work anywhere, but my exclusivity is with AEW, no one else. If New Japan need my services, my doors are opened. Me and AAA spoke last year for a contract for 2022 to give priority wrestling in Mexico for AAA. I was not given a contract for AAA, but I was scheduled for the three TripleManias, but they never canceled the dates nor did they tell me that I was not needed for the shows. Had I known the repercussions, I would not have worked with AAA to work with New Japan. I got no issues with Konnan, and I know he’ll jump hurdles for the company, and I am thankful for AAA and Konnan, but that is my only bother.”

Dominc DeAngelo of AdFreeShow.com held a recent interview with Gail Kim. One of the topics discussed included Kim revealing the reasons why Impact Wrestling decided to keep the Knockouts name for their Women’s Division in recent years.

“When it first became our name, the Knockouts, the Divas were happening in WWE, so it was kind of like the Women’s Division was always this special division, which it still is, but we had our own name that made us stand out from the bunch. Obviously, they got rid of that and made it all one into Superstars, and to be honest, a lot of fans don’t know this, but it was a topic of discussion probably within the last couple of years in terms of whether we change that name and take that away. The Knockouts of my generation were very sentimental about it. We love the name. We thought it was still strong. I guess in a way how fans would interpret it, outsiders, but we loved it because it felt like it was strong. It’s someone who can knock you out but also be a knockout, the double meaning there. So, we never felt like it was anything negative in any way. If anything we felt stronger because of the name and more special. As the generations started switching over, Scott D’Amore had even brought it to us saying, you know, there was discussion about whether this name was something we should still be using right now. I said, ‘I love it. I have a strong sentimental attachment to it.’ I feel like all the girls do. So we took a vote and had an open discussion about it. It was really a blended generation at that moment — actually, it was more of a current generation, to be honest with you, and it was pretty unanimous. I would say 98% said they wanted to keep the name, and that was because all of these girls from previous generation, who is the current generation, said ‘I grew up watching the Knockouts. You guys were the ones who inspired us. We wanted to be a Knockout.’ And so ultimately, as you know, we still have the name and that’s for a reason, because the girls wanted it. I feel like we are still a special part of the company and it’s not like we cant hang with everyone else, it’s just we like being that special part.”

As noted before, Starrcast recently announced that Mike Tyson will be making an appearance for the company for their Roast of Ric Flair event at their Starrcast V convention on June 29th in Nashville, Tennessee. During a recent interview with TMZ, representatives of Tyson stated that he will no longer be appearing due to “unforeseen circumstances.”

During a recent interview with the Busted Open Radio podcast, Women’s Wrestling Army co-owner Maria Kanellis stated that her promotion’s weekly television series will be debuting soon on Pro Wrestling TV and will air on Wednesdays starting at 7PM EST.

As noted before, Lucha Libre AAA announced earlier this week that Matt Hardy is still scheduled to compete at tonight’s Triplemania XXX: Tijuana event in Tijuana, Mexico. The company also announced that Jeff Hardy will no longer be appearing due to his recent DUI arrest. Dave Meltzer reported in this week’s Wrestling Observer Newsletter that AAA head booker Konnan had contacted AEW attempting to get an AEW talent to be Jeff Hardy’s replacement at the event. Meltzer reported that it is currently not known if Konnan managed to secure a one-night type deal for an AEW talent or if Hardy’s mystery partner will be someone from somewhere else instead.

Game Changer Wrestling recently announced that Maki Itoh will be making her official debut for the company at their Homecoming 2022 Part 1 event on August 13th and Part 2 event on August 14th in Atlantic City, New Jersey.

MLW also recently announced a new match for the card of their Battle Riot IV event on June 23rd in New York City: