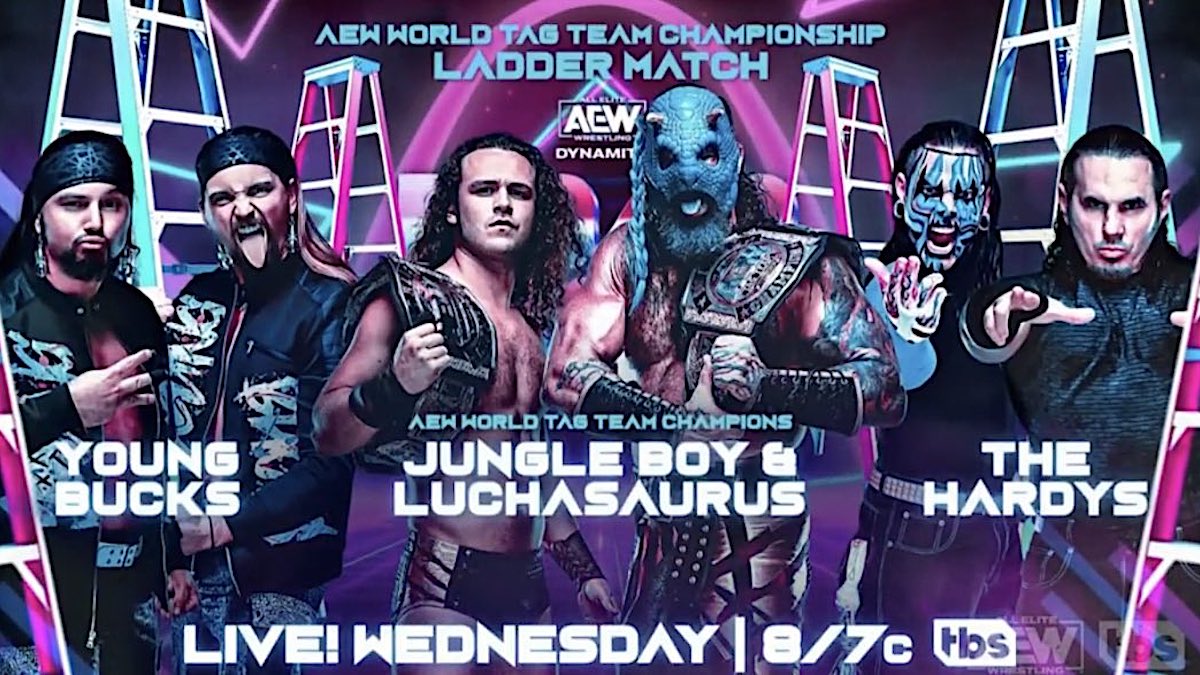 As noted before, Jeff Hardy was arrested this past Sunday in Volusia County, Florida following a drunk driving incident. Following Hardy’s suspension, AEW pulled The Hardys from the originally scheduled Three-Way Ladder match to a regular match between The Young Bucks and champions Jurassic Express for the AEW Tag Team Championship at this past Wednesday’s AEW Dynamite show.

Bryan Alvarez reported in a recent episode of the Bryan & Vinny & Jonathan Show podcast that his sources stated that prior to his arrest, AEW officials had changed their plans for The Hardys to win the AEW Tag Team titles due to concerns backstage over Jeff Hardy’s performance at this past May’s Double or Nothing 2022 event. Alvarez reported that this was the reason why AEW had scheduled a brain scan for Hardy that he revealed during his DUI arrest.

Alvarez reported that AEW officials had plans in place at one point for The Hardys to still be advertised for the Three-Way Ladder match but they would have been taken out during their entrance as a way to write them out of the match. Those plans were also changed following Hardy’s suspension by the company.

During a recent episode of the Extreme Life of Matt Hardy podcast, co-host Matt Hardy gave his thoughts about the future of his AEW career following his brother Jeff’s suspension over a recent DUI arrest.

“As far as what I’m doing going forward, I’m sure I’ll be doing something in some capacity on AEW. I’m going to change it up a little bit, tweak things a little bit and we’ll try to make some magic happen. I look at it as a challenge, as an artist where there’s really no timetable on what is happening. I had a great conversation with Tony Khan, just talking with him a little bit. We’ll see. We have a few weeks to work on stuff. I’m excited for it. I look at it as a challenge, as opposed to looking at everything as a setback. Obviously, it’s disappointing and heartbreaking that I’m not going to be teaming with my brother and we won’t have this last great run, but I am going to make the most out of whatever opportunity I’m given. I will be positive and optimistic as always.”

A recent episode of the Talk Is Jericho podcast had Daniel Garcia as the guest. One of the topics discussed included his thoughts on his tryout in WWE in 2021 and his reasons for signing with AEW instead.

“I think, a year into wrestling, I did actually work for WWE. I wrestled Drew Gulak on WWE 205 Live in a 15-second match, he beat me up pretty bad. It was pretty nasty, pretty ruthless. Then I had a WWE tryout in January of last year and I had a match on an NXT right after the tryout. They asked me to stay another day to go and have a squash match against Tyler Rust. He was in Diamond Mine with Roderick Strong. The match went really well. I went through the back and Shawn Michaels loved it, Road Dogg loved it, A-Train loved it, Triple H shook my hand and said, ‘Welcome to the team!’ I think he thought I was signed, but I wasn’t at the time.

In my mind, I’m like, ‘I guess I’m going to NXT. Mom, I’m moving to Orlando. I talked to Canyon Ceman right before I left and he said, ‘Hey, let me know if any other if any other place has an interest in you because we will sign you sooner.’ In my mind, that’s disrespectful to me. If you want to sign me, just sign me. Then, I remember, I was like, ‘Okay, he wants to play that. I’ll play it back to him.’ He said, ‘So if you’re gonna sign anywhere else, talk to me sooner and at the time,’ I had like, interest from Ring of Honor and I knew AEW wanted to bring me back in for extra work. But I was like, I’m gonna make this seem bigger than it actually is. So I said to him, ‘Well, with that being said, I’ll talk to you very soon.’ I think he got kind of hot me for that. I think that shook him up a little bit and they emailed me a couple of weeks later, kind of saying like, ‘Oh, like we’re gonna stay in contact,’ blah, blah, blah. Then that kind of made me mad and I went on a crazy indie run that got me signed with AEW.”